The AMAR project works to support displaced members of the Yazidi community cope with the effects of mass trauma through a Community Music Project, mobilising traditional music to reinforce group resilience.

The story of Music and its multifarious roles is woven into the history of global communities and cultures. Music has been applied as a catalyst for various development initiatives across the world: harnessing its qualities connected with social inclusion, trauma-healing, individual well-being, educational enrichment, shared-society/community building, and many other objectives.

From a therapeutic perspective, musical participation encourages emotional understanding and regulation. Music is a medium for communication and self-expression and can contribute to healing through its positive physiological effects1. Music has been shown to strengthen, create, and present both individual and collective identity2; in this sense, it can be used within communities faced with a range of complex and intersecting adversities such as trauma, statelessness, and loss of (cultural) identity.

In the context of the refugee crisis, music-based projects in countries such as Greece, Jordan, and Turkey are being run within camps as a therapeutic and educational tool to support mental health, foster empowerment, and offer enrichment for a range of ages, through activities such as group classes, song writing, and ensemble playing. Outside this setting, within the cities and towns of several countries hosting new migrants, there are community music projects that, in addition to offering the experience of the holistic qualities of music, also serve to promote national integration and inclusion. 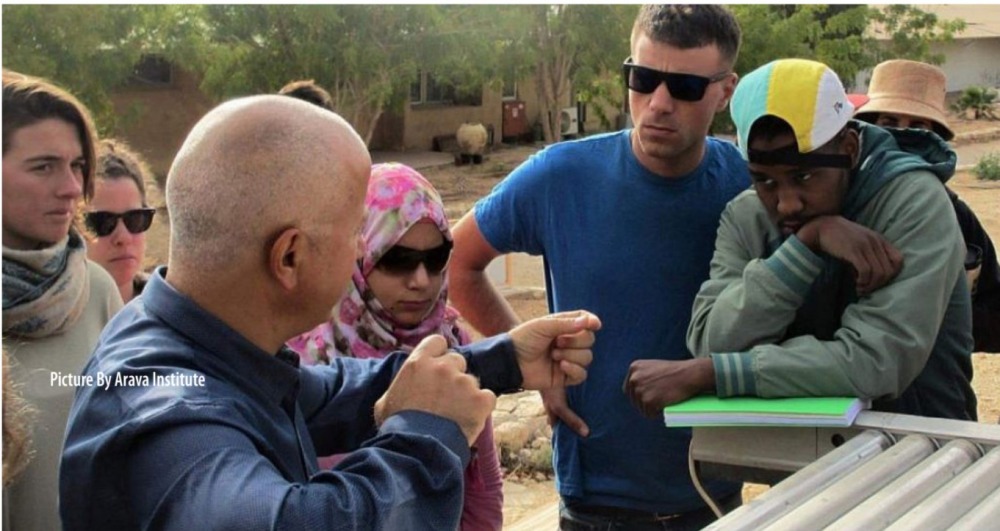 The practice of such projects belongs to the overarching field of "Community Music" (CM). Generally speaking, CM is the practice of employing active music-making (performing, improvising, etc.) to serve the well-being of a community, taking shape within a range of social settings3. With the potential for a wide scope of diversity, CM initiatives take place across the globe, utilising all types of musical genres and styles. This diversity makes it a versatile practice4.

This article looks at a case study of a project that engages specific traditional music practises as a tool for community development and healing, while concurrently providing the community itself with the opportunity to lead initiatives promoting the safeguarding and sustainability of their communal cultural heritage. The project explores the use of traditional music knowledge and teaching in community development, seeking to highlight the relevance of music as a development tool with multi-sided functions.

"In ancient times, this music was used as a form of psychotherapy for traumatised people. Through the AMAR project, this historical practice has been revived, with Yazidi music mobilised as a therapeutic tool for healing the recent individual and collective traumas experienced by the community."

“Applying” Ethnomusicology in the Community

Broadly speaking, the field of Ethnomusicology refers to the (especially non-western) study of music belonging to different communities, and the functions that music serves in both the social and cultural contexts. It examines music as a social practice, conceptualizing its significance to the community, its musicians, and its audience5. Here, the role of music and its cultural subtleties may be identified: understanding music's purpose in community rituals, religious ceremonies, folklore, and the transmission of indigenous knowledge, for example. In addition, this ethnomusicological awareness allows for the identification of music practises at risk of becoming extinct or lost, due to conflict, globalisation, poverty, and our continuously changing world.

A step towards the practical implementation of such ethnomusicological studies is the concept of Applied Ethnomusicology. Applied Ethnomusicology is a wide-ranging philosophical approach to the study of music in culture, taking social responsibility and social justice as its core principles. It utilises ethnomusicological knowledge and understanding in practical applications—specifically by creating a musical intervention within a community—with the central aim of benefitting that community6. This intervention can take the form of workshops in lost music practices, ensuring that they are transmitted to younger generations; making recordings of traditional music, which are then sold commercially, with all profits given back to the community: and the revival, documentation, and promotion of certain traditional performances, with the intent of encouraging tourism. Rather than implementing a community music project with a top-down approach, Applied Ethnomusicology allows for a nuanced process through which the community can direct efforts, using their own music as a driving cultural asset. Programmatically, this could include identifying local traditional musicians to lead projects, or incorporating the knowledge and skills of the older generation to revive certain musical traditions. This then has the potential to transform into a hybrid approach; for example, by recording the music with modern technology, or even acting as a springboard for creating new music. However, firstly the unique community music is held up at the forefront of the intervention, and is explored as a cultural basis for strengthening community development and resilience.

If one looks at the notion of safeguarding intangible cultural heritage, Applied Ethnomusicology as an approach may provide a community, facing the loss of its heritage, with the central role of safeguarding it, ensuring that community continuity and identity are respected and protected.

The Yazidi (Êzdî) people, are an ancient, monotheistic, ethno-religious community of Mesopotamia, concentrated in the northern mountain regions of Iraq. The Yazidi have endured repeated religious persecution, discrimination, and marginalization across the ages, resulting in multiple individual and collective traumas; today, the Yazidi are considered one of the world's most endangered religious minorities7.

Between 2014 and 2017, the Yazidis of Northern Iraq faced a genocide of mass atrocities carried out by ISIS, resulting in the displacement of approximately 400,000 people. Some estimates suggest that more than 5000 men and older women were killed, while more than 6000 women, girls and children were enslaved8. As of 2020, an estimated 200,000 Yazidis were living in Internally Displaced Persons (IDP) camps in Northern Iraq9. Confronted with genocide and ethnic cleansing, the Yazidi faced brutal sexual violence, mass executions, forced conversion and other unimaginable crimes.

The Yazidis are an endogamous community, inheriting their identity, culture, faith, and traditions from their ancestors10. Concurrently, Yazidism is an oral religion and culture; the community's sacred and secular songs and music are not written, but rather transmitted down through families for millennia. As a result of persecution, Yazidi music, a core element of their communal identity and faith, is at risk of being wiped out. Sacred religious texts of immense significance, known as qewls, were traditionally memorized and performed with music. Qewls were passed down the generations by a specific group of qewwals. Following the most recent genocide, it is believed that only eight qewwals survive today. 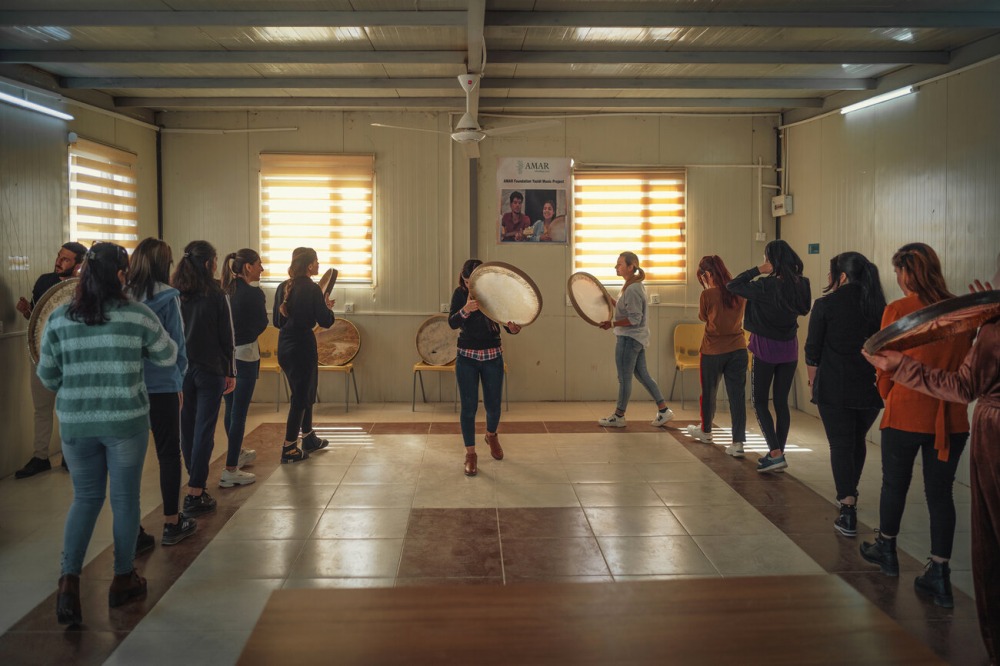 The AMAR Foundation Music Project was formed to combat the risk of Yazidi music, and moreover the cultural identity of the Yazidi, becoming extinct. Operating in Internally Displaced Persons (IDP) camps in Northern Iraq, surviving Yazidi musicians were called upon to teach their traditional music and instruments in classes for children and young people. A Yazidi women's choir was also formed. Performances to celebrate Yazidi music and culture were organized by participants within the camps.

In ancient times, this music was used as a form of psychotherapy for traumatised people. Through the AMAR project, this historical practice has been revived, with Yazidi music mobilised as a therapeutic tool for healing the recent individual and collective traumas experienced by the community. Participants in the women's choir, having endured enslavement and severe sexual violence, reported feelings of happiness and relief when singing this music together with other community musicians. They also reported feelings of a deep connection to their unique heritage as a result of this musical engagement12. The experience also offers participants the potential for moments of relief from their current circumstances. One woman, previously enslaved by ISIS, stated that attending the music classes helped her forget her sadness about how bad life is in the refugee camps13.

For these women, having faced rape, torture and forced conversions—a tactic deliberately employed by ISIS to dismantle the community from within—it can be suggested that the cohesiveness of the choir helps to decrease their fears of rejection, reassuring them about their re-entry and inclusion within the community following such damaging events14. A Yazidi music teacher working on the project stated that the music is extremely important to their culture; as a minority group, music helps keeps the community together15.

The AMAR project has also recorded and documented Yazidi music and performances both in and around the camps. The material is archived at libraries in Oxford, Mosul, and Dohuk, to ensure its availability and sustainability for future generations. Depositing this material with such institutions ensures that this significant part of Yazidi heritage—and thus, Yazidi identity—will never be destroyed or erased.

Through this case study, it is possible to suggest that by mobilising traditional music, community development can take form across a range of levels; and that it is further amplified by this culturally relevant approach to a Community Music project. By engaging with musical heritage rooted within a specific community, which in this instance symbolises a positive relationship to the communal cultural identity, the process may provide critical psychosocial support for coping with the dire consequences of conflict, helping mental health while encouraging individual empowerment.  Simultaneously, communal identity may be further strengthened and reinforced through engagement with musical traditions and acts, as a process of catharsis for the common struggles endured as a community, and thus nourishing group resilience. Through this applied ethnomusicological approach, the community is offered ownership of the process of preserving intangible cultural traditions on the verge of extinction because of war and community marginalisation. As a result of this ownership and full embodiment of the process, it is also possible for increased awareness of unique musical traditions to be upheld within the community by further generations, and shared with a global audience through cultural engagement. Furthermore, in the wider ecosystem of global musical communities, musical diversity is maintained—while, importantly and practically, serving the community that is central to its existence.