At a time where increasing numbers of people around the world lack access to essential health services, the Community Health Worker (CHW) has played a pivotal role in expanding coverage and embedding crucial healthcare initiatives in marginalized communities. However, the role suffers from a lack of formal recognition and limited opportunities for personal development. Placing gender at the heart of the CHW agenda will enable an overhaul of perceptions about their work; it will also create an opportunity for promoting equality, by acknowledging the contribution women make to community life 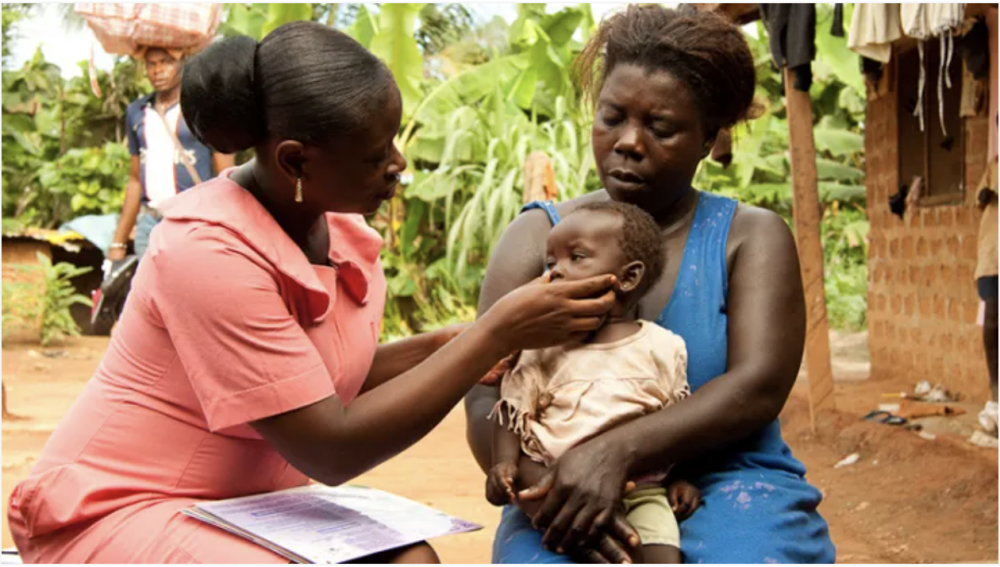 Half of the world’s population does not have access to essential health services. Furthermore, approximately 100 million people have been pushed into extreme poverty by health expenses—representing at least 10 percent of their household budget. Hence, universal health coverage (UHC) has been at the center of the international public health agenda and is the cornerstone of Goal 3 of the Sustainable Development Goals (SDGs).

Women in the developing world face even greater inequities with respect to access to health care. For example, in 2019, it was estimated that 1 in 41 women died from maternal causes in developing countries, in contrast to 1 in 3,300 in developed countries. In addition, between 2015 and 2020 only 64 percent of births were attended by a healthcare professional in sub-Saharan Africa. According to the WHO (2019), there are less than 4 nursing and midwifery workers per 1000 women in more than 90% of all low-income countries. As stated by The Lancet, if women had access to adequate contraceptive methods, 100,000 women could be saved every year from death during childbirth.

During this century, there has been a rise in the number of people with access to key health services such as immunization, family planning, antiretroviral treatment for HIV, and malaria prevention. Community Health Workers (CHWs) have played a crucial role in expanding this access. CHWs are usually female volunteers, who go door-to-door to visit households, placing specific emphasis on mothers, pregnant women, and children. CHWs provide basic health services such as antenatal and family planning sensitization, HIV counseling, and information on hygiene and preventable diseases, and also make referrals to local health clinics. The incorporation of CHWs into primary healthcare teams is a crucial solution for the problem of access to essential health services. CHWs have contributed to improving maternal and newborn health outcomes in low and middle-income countries, and have played a key role in reducing inequity of access to health services, by offering preventive, promotive, and curative health services. Hence, they constitute a solution to the global shortage of health workers, saving over 3 million lives every year.

Moreover, CHWs act as a link between the formal health sector and local communities. What this means is they act as intermediaries between the State, NGOs, and the communities; in turn, their role is located in a middle ground between formal and informal work.

A wide range of local and international organizations around the world run CHW programs, including BRAC International, ASHA, Living Goods, and Partners in Health. Beyond these, there are government-initiated CHW programs in a number of countries including Uganda, Kenya, India, Nepal, and Pakistan. While the design and implementation of CHW programs vary from one organization or country to another, CHWs share a number of key characteristics: they are part of the community; are often selected from within; and—in contrast to professional health workers—lack formal nursing or medical training. Furthermore, they are usually volunteers; that said, they may receive transportation money or lunch allowance, food parcels, or a small monthly stipend.

Gender is a core aspect of the CHW model. This is not only because 70% of CHWs around the world are women, but also because gender permeates all stages of the programs; recruitment and retention procedures, service delivery, safety and vulnerability, access to services, and professional advancement. In this sense, CHW programs are inherently gendered, a fact that bears certain benefits but may also present specific challenges.

In a way, the role of CHWs role is to decentralize health care. This is achieved through empowerment programs that create a supporting structure for local women, made up of other CHWs and women from the community. This enables them to participate and make informed decisions over their own healthcare.

The programs provide health services that are usually missing in the communities. They also expand women’s income-earning potential, usually by selling hygiene products or basic medicines such as antidiarrheals, provided by the organization implementing the CHW program and training. However, these programs can also perpetuate a patriarchal structure, within which women’s jobs are allocated in “a precarious and informal realm of the economy” that exposes them to further risks. They also reinforce the perception that informal care work is a “women’s domain,” which in turn is then downgraded and informalized in the socioeconomic system. Prince (2015) raises the question about why, despite unfavorable economic compensation and time-consuming activities in a context of high unemployment, volunteering as health workers remains a popular occupation across many African countries. In this regard, the low (or no) payment may be a factor hindering the participation of men, since it is usually deemed that they must solely play the role of the “bread-winner.” This exposes social justice issues, such as the lack of political recognition and the undervaluing of women’s work.  Due to the volunteering nature of the program and the absence of a formalization framework, the CHW role suffers from a lack of professionalization and, sometimes, little acceptance from other healthcare professionals. This results in the creation of a glass ceiling for CHWs, limiting their career path, upskilling, and professional growth options. 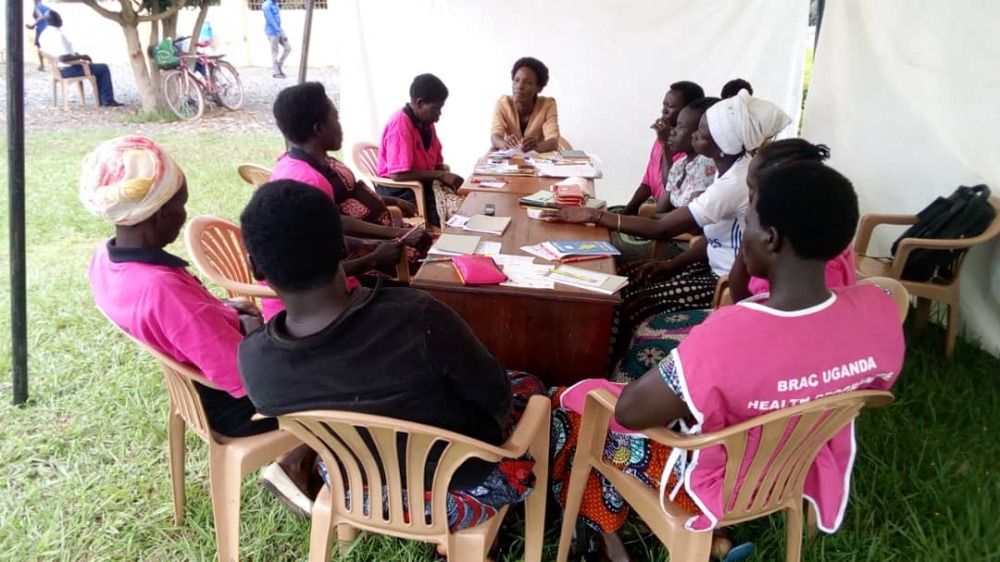 CHWs are usually women from modest socioeconomic backgrounds, without formal education and limited in their career opportunities.  A qualitative study performed by BRAC Uganda (2019) found that the CHW role represents an opportunity to acquire formal education, which otherwise would not have happened throughout their lives. Moreover, receiving training, acquiring knowledge in health, and gaining a respected role in the community all present as significant achievements. Because CHW programs seek to empower women by helping them develop specific medical knowledge and skills that allow them to serve their communities, they play a vital role in empowering women and giving them agency over their environment. As a result, the women who have benefitted from these programs are themselves able to play an essential role in empowering other women in their communities.

They become the point of reference or gatekeepers for health interventions that are affected in their communities. Ultimately, their jobs become meaningful by creating the opportunity to make a difference in their communities, which has been found to be an empowering factor for CHWs. CHWs are recognized by their communities and often become role models, which fosters other effects such as increasing their leadership role. This also leads to improving their status and their feelings of self-worth and self-esteem.

Participation in CHW programs enables these women to collaborate with local councils and committees, which in turn works as a catalyzer in local acceptance of the phenomenon of women working outside the home. The ASHA program in India is one example of effecting policy changes through CHW work towards gender equality. The program developed village health committees led by CHWs, which encouraged leadership in spheres usually dominated by men.

By expanding women’s access to sexual and reproductive health, CHWs can empower them to make informed choices about their health and family planning, which in turn can provide better opportunities for education, the labor force, and health. Additionally, the CHWs' role can also be instrumental in addressing violence against women. However, institutional and legal support to back this role is essential; otherwise, they themselves may end up facing such violence in their communities.

“Because CHW programs seek to empower women by helping them develop specific medical knowledge and skills that allow them to serve their communities, they play a vital role in empowering women and giving them agency over their environment.”

In sum, this article aims to highlight the key role that CHWs play in addressing issues of equality, both in their own personal lives and in their communities. CHWs have played an important part in providing access and services to women, and have made it possible for women to make informed decisions about their healthcare and wellbeing. In addition, this role tends to empower CHWs, by creating a different sense of participation within their communities.

However, it is important for these programs to have a gender transformative approach, seeking to address the socio-cultural challenges that CHW face in their communities and within the overall political agenda of their countries. In this regard, it is crucial that the design, implementation, and evaluation of CHW programs take into consideration such variables that can hamper their work and impact.