This paper will present the differences between the approaches towards the notion of “land,” examining the political implication of “placemaking” activities such as forming shared public spaces neutral of national meaning, across the city of Jerusalem. 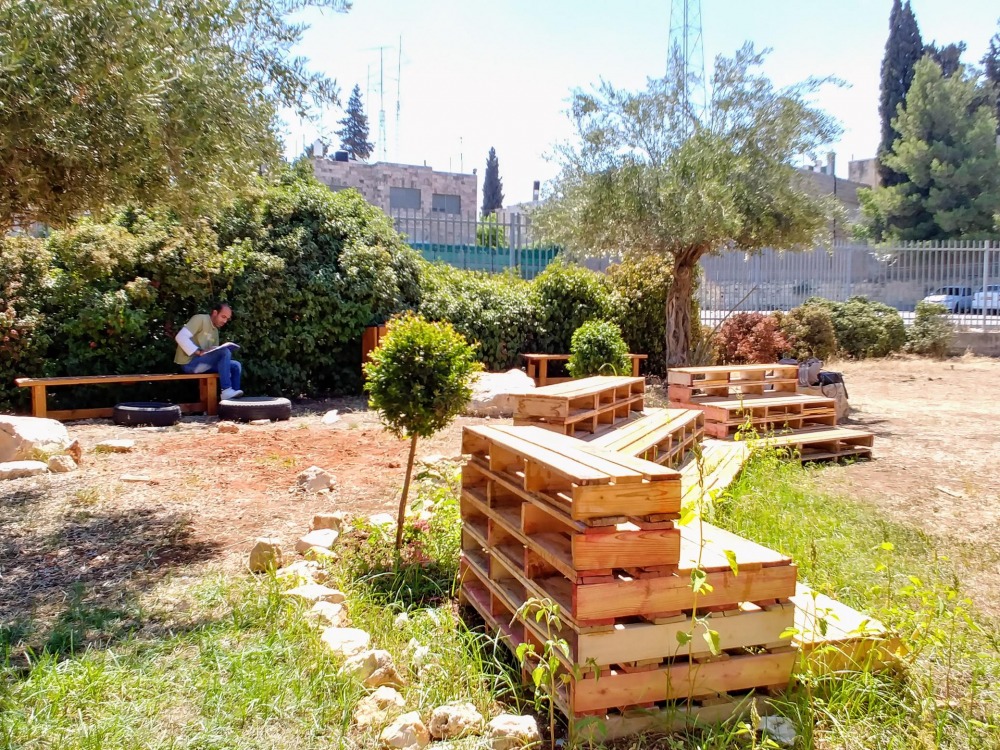 Over the last years, different organizations initiated projects focusing on public spaces across Jerusalem. As these projects were developed from an urban development perspective, they were often portrayed as politically neutral. However, as the local national conflict is manifested constantly through spatial dynamics, and utilization of space has political ramifications, especially in regards to the power relations between the sides. In contrary to works discussing the way spatial planning has been used for maintaining and solidifying the interests of one side, participatory “placemaking” activities can have the opposite impact.    As it shifts the meaning of the historical land to the present “place” it holds the potential to form new relations between the sides, offer new reclamation of space and create a new sense of agency.

But before utilizing the space, the conflict is rooted in the symbolic meaning of the land. When examining the use of land in the historical context, it becomes clear that narratives about landform the basis for national identities. As various theories of nationalism explain, the connection of specific people to a specific territory is one of the foundations of modern national identities. As national identities are based on the recognition of certain mutual rights which result from membership of a specific group, the connection between nation, territory, and membership rights establishes the foundations for the exclusion of others. Consequently, and consistently, the discourse about land and the origin of communities is constantly used as a tool for the politics of exclusion.

This discourse is central in the politics of the Middle East and has been particularly visible for the last century in the context of Israel and Palestine.  Even though this region is rich in cultural and religious diversity, its “land” has repeatedly been used as grounds for exclusion. Consequently, local maps, drawn up by both Israeli and Palestinian communities or officials, represent one specific historical narrative; one that connects the dots between biblical times or a specific historic period and the present—ignoring the present condition, and the new stories and new communities which have formed links to the same piece of land. Such representations are often used to justify discrimination and set the political foundations necessary for expulsion, deportation, and evictions.

In Jerusalem, the combination of religious belief, national identity, and the bureaucratic modern state have set the use of land as the faultline of the national conflict. Thus, in Jerusalem, the state of disputed territory has transformed what otherwise could be seen as typical urban planning processes into instruments in the process of excluding people from their land. Local residents in the eastern side of the city, occupied in 1967 by Israel, remain in bureaucratic jeopardy, as master plans are not approved and local development and construction are stifled by demolition orders.

Place-making experiments in East Jerusalem hold the potential to create a kind of a bridge between the various populations and their land in the general public sphere, forming action of “reclamation.”

However, according to Joval Portugali, the supposed separation between populations blurs when one assumes a geographic point of view. When one examines the geography of the land, including patterns of transportation and employment, separation is more difficult to locate, even though it is still a result of a conflict over the control of the space.  Furthermore, he argues, changing the focus—from a general concept that belongs to an idea of the past to a more tangible and present reality of the people living on said geography—may help in binding rival groups together. Such an approach has the potential to detach the notion of land from the myth of territory; but rather, through fragmentation, productivity and instrumentality, it is possible to split an all-encompassing and illegible territory into small, contextual parcels, enabling these to be transformed into a “place."

Such conceptual yet practical framing can support the instrumental inclusion necessary for life to take place in contested public spaces. According to geographer Deborah Martin, focusing on physical conditions and daily life experiences can reframe a place by fostering shared geographical identities and obscuring social differences. Furthermore, when residents are incorporated in the process of designing a place, they became acquainted with the possibility of creating a collective vision.

Within this context, public spaces are consistently contested in Jerusalem. Yet, over the last years, groups of residents of Jerusalem have been participating in different experiments to create more inclusive “public spaces”. Inspired by the squatter movement in Berlin, which took over deserted buildings and created life out of conflict, urban activists search for the bureaucratic cracks in order to create life in conflictual places. In Jerusalem’s Wadi al Joz, for instance, residents were incorporated in designing a map of the neighborhood following the development of a local square. In a different community, the neighborhood of Abu Tor, local residents participated in the identification of shared public space and the design of inclusive symbols for it. Moreover, in the East Jerusalem district of Sheikh Jarrah, streets were painted or re-organized in order to be more inviting for residents; new small squares were established, and a cleaning crew was established. In Abu Tor and Thuri, these measures were even more revolutionary, succeeding in bringing different communities together, painting a deserted roof, and opening a community garden that will create a shared space in a divided city.

Although such activities may be portrayed as essentially a-political, as part of urban development, or even as normalizing discrimination, we see them as revolutionary. While, according to architect Malka Greenberg Raanan, an examination of usage patterns by different communities proves the division and segregation of the city, the urban geographer Marik Shtern argues that in a contested city such as Jerusalem, encounters are enabled only in ex-territorial spaces, for example, neo-liberal and consumer locations like shopping malls.  Thus, in a city suffering from a violent and divisive conflict with its origins in a mythical past, manifested in the present by the divisions indicated by official planning practices, shifting the meaning of the land from its past to its current state, or in reimagining its future, is a new action of reclaiming both the space and the narratives of people’s current lives. 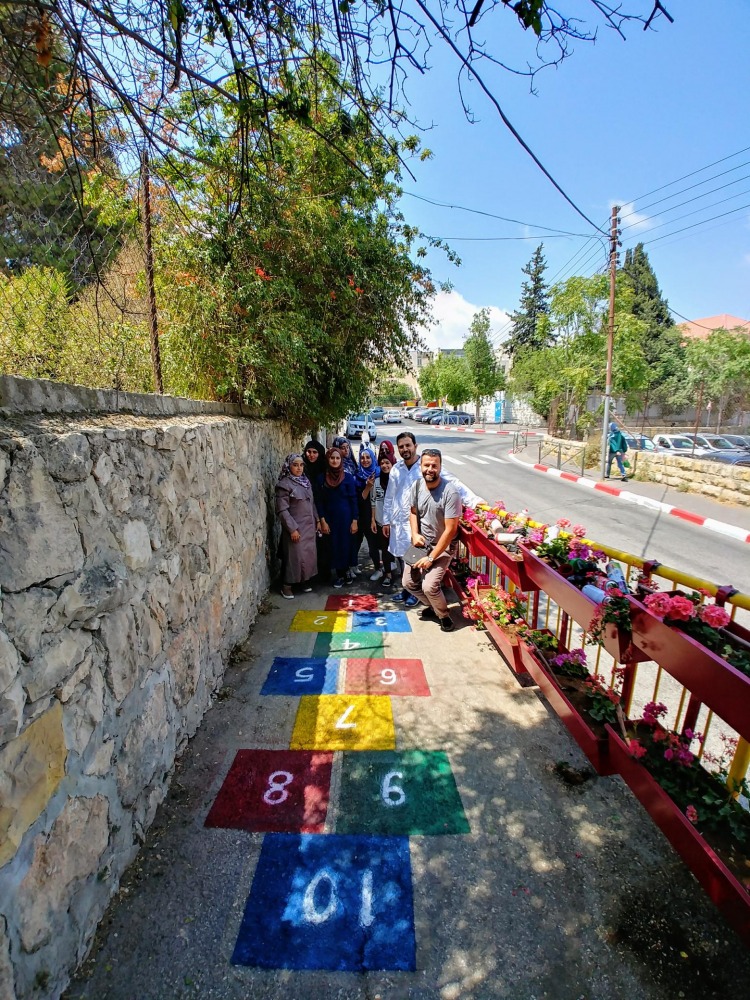 Place-making experiments in East Jerusalem hold the potential to create a kind of a bridge between the various populations and their land in the general public sphere, forming action of “reclamation.” After seeing deserted spaces as a bureaucratic battlefield, place-making activities enable local residents to feel that these spaces in fact belong to them and that they can have a say in how these spaces are shaped. As long as these new places are not demolished, these actions empower local residents, create a new sense of agency, and can model new partnerships across lines of conflict.   If their development is done in partnership (at least to some degree) with the authorities, they can also create new relations between the residents and the authorities after decades of marginalization and conflict.

In this way, step after step, place after place, more neglected residents understand that they do hold agency in the shaping of their surroundings —and with this understanding, they are empowered to be more involved. Through reframing the meaning of space to its present implications, a new urban agency can be enhanced. Furthermore, a new and updated connection to the specific space is created, enhancing shared solidarity among residents, even across lines of conflict. More importantly, a focus on the present and future creates a framework that focuses on practical goals and objectives, which can become the basis for the development of a long-term resolution.

Thus, land, as we have learned, has a dual meaning, and is a malleable enough concept for it to be constantly manipulated for religious, nationalist, and exclusionary purposes. Changing the focus from what was imagined to be the past to what actually is suggests a transformation from land to a notion of place and the creation of a new framework for its utilization. In this regard, place-making in a divided city is revolutionary.  As it focuses on the current lives instead of its symbolic meaning, it can promote a city by the people and for the people, which can lay the foundations for a future resolution.